Leaving MONTAGUE HARBOUR the ‘wise boater’ will stay to the middle of the channel that separates PARKER ISLAND from GREY PENINSULA for these points of land hide rock shelves that jut out into the water. 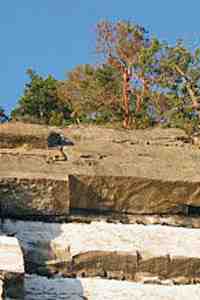 Once clear of Grey Peninsula the boater can head over to the west coast of GALIANO and travel north, stopping to view the many unique rock carvings that have been created by wind and water erosion. Stopping off at the white cliff face that is the home of the Pelagic (Black) Cormorant, shut off the motor and drift along the cliff as the multitude of returning Cormorants swoop in and plop into their nesting areas, while seagulls and hawks drift by the nests looking for an errant chick or a discarded bit of seafood.

Continuing northward the visitor can stop at RETREAT COVE and explore the sandstone cave at the waters edge (photographers may wish to climb inside and use the opening to frame a picture).

Turning westward towards SALTSPRING ISLAND the boater will soon pass by PANTHER POINT on WALLACE ISLAND. By traveling inside the marker called U44 the next stop is the beautiful west coast Marine Park, CONOVER COVE.

Boaters should be aware that U44 is a starboard hand marker and note that it is not just a rock, but a reef that parallels the west side of WALLACE ISLAND. 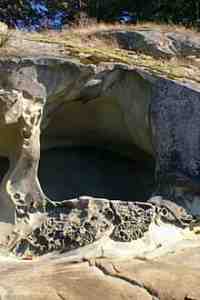 This is an opportunity to tie up at the dock and explore the trails and headlands or set off on a picnic. 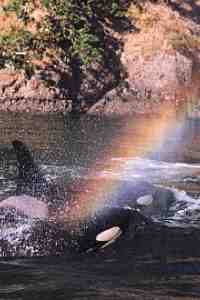 When exiting CONOVER COVE the visitor should stay close to the shore until U44 is passed on the starboard side and the boat is powered up to cruising speed for the trip over to SALTSPRING ISLAND.  The next point of land is FERNWOOD DOCK that is a public dock that juts out into the water? Casting off from the dock the boater can head south to WALKER HOOK for a picnic or an opportunity for the family to swim off the sandy shore.

Traveling along the coast of SALTSPRING ISLAND the boater can decide to return to MONTAGUE HARBOUR or continue on to PREVOST ISLAND and the quiet and tranquil JAMES BAY. This little bay offers solitude, bird watching and clam digging (when they are in season). A great place to shut down the motor, put up your feet and let the world go by. A quick trip across TRINCOMALI CHANNEL and through the channel on the south end of PARKER ISLAND brings the boating adventure full circle and back to MONTAGUE HARBOUR MARINA.

Tie up the boat and drop into the Crane & Robin for fine food, a glass of wine, and a world-class sunset …... Another perfect day of boating on GALIANO.